You are here: Home / Research Issues

Enough valid research has been conducted to justify action to protect against health effects:

Many hundreds of peer-reviewed scientific papers have now been published on biological effects of non-ionising radiation demonstrating biological effects occurring in response to a range of frequencies.1 It should be noted that modulations to RF communications fall within the Extremely Low Frequency (ELF) range. It remains unclear whether it is the RF or ELF frequencies that are most bioactive, but that academic question does not need to be answered at this point in order to be clear that the technology is not safe, as both existing and proposed emissions contain both portions of the spectrum integrated in this way.  The evidence base for certain types of biological interference is extremely strong. In excess of 90% of publications noted oxidative stress, both in vitro and vivo (animal studies).2 Oxidative stress which can damage multiple biological systems is implicated in many diseases of high public health importance such as Alzheimer’s, cancer, cardiovascular disease and infertility. 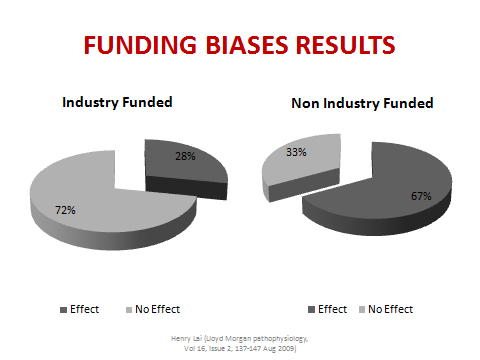 Figures thanks to Prof Henry Lai via Lloyd Morgan 2009

If industry funded literature is considered a conflict of interest (as has been deemed appropriate in a court of law 5), then the scientific wealth of literature demonstrating cause for concern is over-whelming.

Common research failures include:
In appropriate data processing: It is not uncommon for biological effects of EMF to cause polar opposite changes in the same parameter 6 depending on exposimetry or individual subject variations. If changes occur in both directions but are then averaged, the changes can no longer be seen and ‘no effect’ is inappropriately reported. Current studies which find “no effect”, can be littered with design inadequacies such as this. For example with. blood pressure changes, if half of a group are found to have hypertension (high blood pressure) and half hypotension (low blood pressure), if the mean is taken then no effect may be found even though autonomic nervous system disturbance is apparent.

Study Reproduction Failures: Attempts at reproducing data will often fail, due to inconsistencies in replicating the exact design of the original study 7.

Consistency is not necessary: One positive study is not counterbalanced by a negative one. It can be easier to fail to find an effect than it is to prove an effect exists. The Seletun Scientific Panel notes that complete “consistency” of study findings is not to be expected, and it should not be interpreted as a necessary pre-condition for a consensus linking EMF exposure to health impacts. “Consistency in nature does not require that all or even a majority of studies find the same effect.” 8 This sensible sentiment is corroborated by the WHO, “A demand for scientific proof is always a formula for inaction and delay and usually the first reaction of the guilty … in fact scientific proof has never been, is not and should not be the basis for political and legal action.” 9